What is Machine Learning? Myths and Reality

The following article on machine learning was written by an algorithm.

You’d be forgiven for believing that little lie. Machine learning has become a point of fascination for so many industries. The idea that a machine can be “taught” brings with it any number of potential solutions for life’s once-intractable computing and business problems. Seen in this light, would it really be all that shocking to read a blog that was written by an algorithm that “learned” how to mimic the style of a human author?

It would not, and if you click that link to view just such an article, you’ll see why. Machine learning has grown to the point where a computer can conduct many tasks previously only made possible by the capable minds of very smart humans (or conduct tasks that were never within reach of humans).

Think of it this way: Regular programming essentially boils down to coding an action. When X happens, do Y. When the user clicks this button, open the link tied to that button to pull up a new webpage.

But machine learning is more akin to coding a behavior. You’re not building the system to only respond to specific inputs. Instead, you’re saying, if these thousands of inputs all say the same thing, make an inference about what the correct action will be.

Let’s take self-driving cars, for example, because it’s reflective of both the challenges and opportunities of machine learning. We keep hearing, year after year, about how self-driving cars are coming. And, indeed, some of the world’s smartest minds are busy trying to perfect this technology.

But to make these a reality, cars can’t just be programmed to commit actions, because the scenarios they confront are limitless and unique. They need to learn what actions to take based on trillions of data points. You can’t program for every scenario, because the developer can’t program: “When you approach the intersection of Main and Broadway, at this speed limit, at a yellow light, with pedestrians on the crosswalk, and construction ahead, and a car coming behind you too quickly, speed up to 27 miles per hour and turn right.”

The human brain does these calculations without thinking, and what’s more, we learn from past experience. It’s impossible to repeat that program again and again and again, ad infinitum. Instead, it’s the behavior based on almost infinite data that must be coded and learned so that the system adapts to a variety of driving conditions. 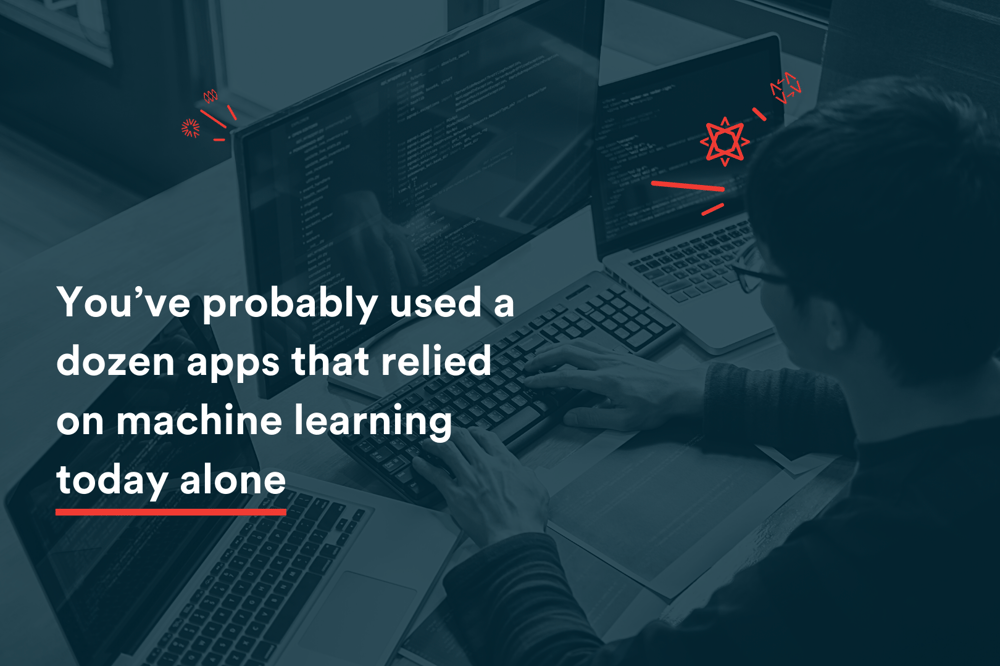 It’s not. In truth, it’s a facet of it. We previously covered the difference in a separate article focused on the definition of artificial intelligence, so we won’t spend too much time here. But the key takeaway to know is probably this passage:

“Machine learning is a subset of artificial intelligence and can be simplified as the process or algorithm where machines learn from data in order to make predictions or perform other functions more accurately as they take in more data. This can be seen as the learning part of AI (though it’s still an important part overall).”

Think of it this way: machine learning reacts and adapts based on data fed into it. If the algorithm behind a shopping website notices you’re ordering a new shirt every month, it can start to recommend what shirts you should buy. True artificial intelligence would see the data about the shirts you wear and write you a poetic love letter because it admires your taste in shirts and just had to put its feelings down on paper. It would be a commitment to a behavior or action that simply wasn’t coded or really even anticipated.

You can see how machine learning, while beneficial and massive in scope, still pales in comparison to true artificial intelligence.

Reality: So far, some of the examples we’ve used, such as the self-driving car, might give you the idea that we’re either far away from widespread machine learning or it only exists for super-advanced applications and purposes.

The truth is you’ve probably used a dozen apps that relied on machine learning today alone.

Did you listen to a streaming music player like Spotify or Pandora and it created a playlist based on your listening habits? What about Netflix, did it suggest things to watch based on your viewing history? Did you scroll through Facebook and see it serve up an ad that matched your interests? Did you shop on Amazon, and it did use your previous purchases to influence additional purchases via suggestions and brilliant UX design?

Yep. That’s machine learning. Nobody programmed those actions. A machine took all that data about you, compared it with other data to learn about your interests, and then made a recommendation. And that’s only the tip of the iceberg. Machine learning has tons of practical applications happening around the world, every day across every industry, and it only continues to evolve. It’s what powers drones, government and commercial services, healthcare breakthroughs, and so much more.

You’ve been affected by machine learning even if you didn’t realize it was happening.

Myth #4: My Business Has No Need for Machine Learning

The democratization of machine learning is occurring right now. We’ve arrived at a key turning point in how we all perceive this technology. No matter the aims of your business, there’s probably somewhere that machine learning can be harnessed to help you turn a profit.

That could mean a tool that helps you identify customers based on things like geographic location, demographics, browsing history, etc. It could mean improvements to your e-commerce platform that help you acquire new customers and maintain loyal followers. It could mean increasing the scope of your current products to provide something entirely unique that hasn’t been seen on the market ever before.

The possibilities are endless, and closer to within reach than you might realize. If there’s a chance that big data and machine learning can help your business, then you owe it to yourself to explore what comes next.