The buzz around augmented reality is that it’s one of those promising technologies that always seems to be just on the verge of going mainstream but hasn’t quite gotten there yet.

But this reputation is not really fair; in fact, augmented reality (AR) is an increasingly common part of modern life that continues to thrive and evolve even if it’s not visible to you at all times.

Google Glass might be perhaps the most prominent example of a tech company going “all in” on technology that makes augmented reality possible, but you can find countless other examples of businesses and tech products that harness AR and have even gained a foothold in the mainstream.

If you know where to look, you’ll see people and organizations doing some really exciting things with AR right now. These applications and devices have evolved traditional industries beyond what was previously thought possible, and we’re going to see more and more developments in the coming years.

In today’s blog, we’re looking at some of the current uses for augmented reality. In the process of reading, you might just come up with a vision that inspires your own business to innovate beyond the limits of what’s been deemed possible.

What’s augmented reality? It’s pretty straightforward: AR is the use of technology to alter, i.e. augment, our perception of the world around us.

Let’s go back to the Google Glass example, as that’s maybe the best way to quickly understand how AR works. Glass (and other devices of its ilk) is essentially a set of glasses that displays information from the world around you. It uses the vast stream of information Google has compiled within its app ecosystem (think Maps, Streetview, and the standard Google search engine, just to name a few) to display pertinent details within a heads-up display.

Want to immediately know what restaurants are nearby, which is the highest rated, and browse their menus while you walk? That was and remains the promise of Glass, even if it never really caught on in the way that the Alphabet tech giant was hoping. 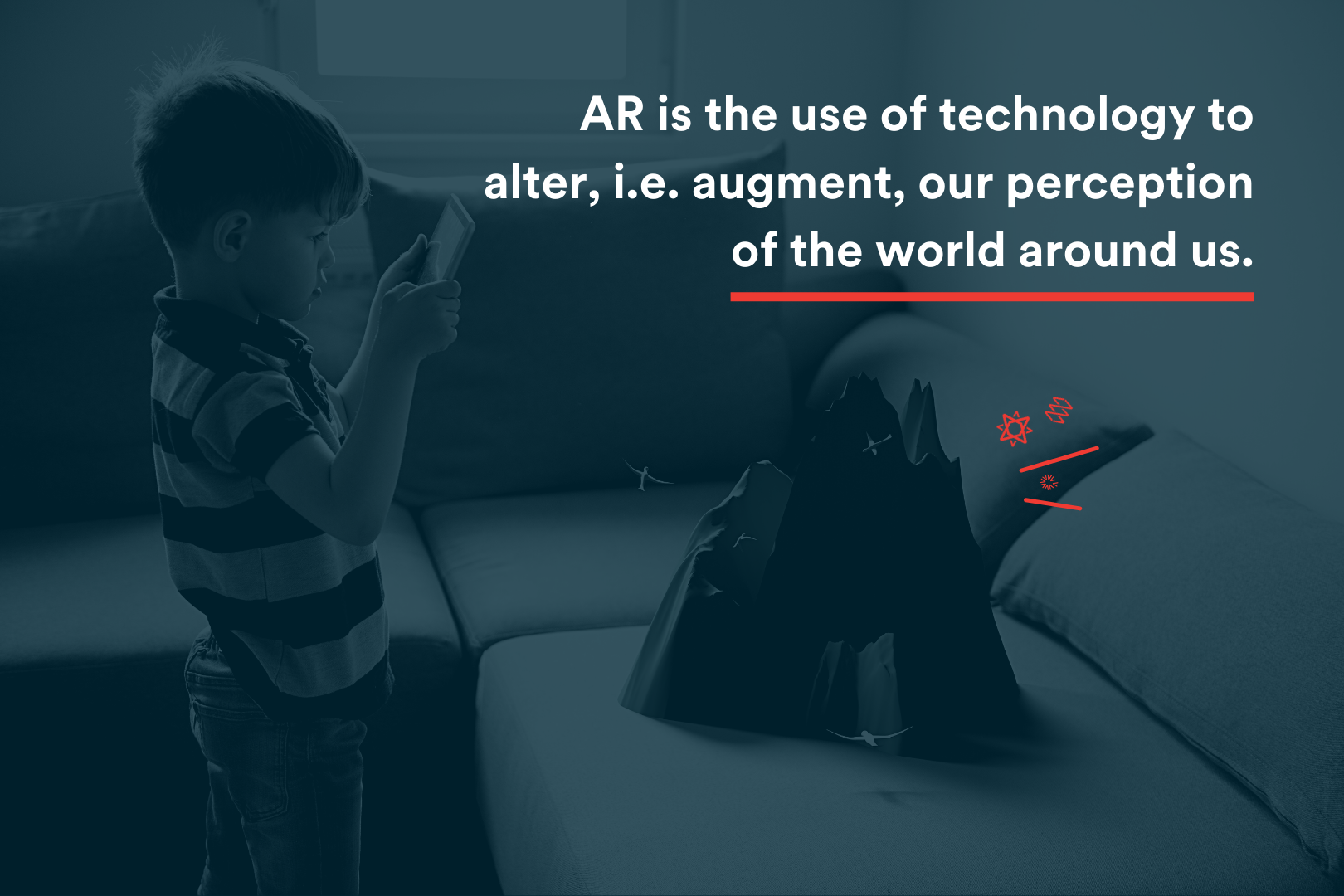 Glass has seen its adoption largely focused within industry-specific areas. In healthcare, for instance, doctors and other medical professionals still use Glass as an opportunity to take notes, pull up patient health details, stream their patient conversations to medical students, and even ensure a hands-free way of tracking surgical processes. It’s in industries like healthcare, manufacturing, and others where Google Glass has thrived, with Google actually releasing an updated version of the device a couple years back, an announcement you’d be forgiven for missing.

A wearable that provides an overlay atop your actual vision isn’t the only version of augmented reality though. You can also achieve AR through an overlay on your phone, tablet, or any device with a screen and/or camera. Sometimes, even the camera isn’t necessary if the device can have a physical impact on the world around you.

Here are a few examples of areas where AR is being used today.

One of the most prominent industries where you can see augmented reality in action is gaming.

AR brings traditional videogame mechanics and graphics into the real world. Pokémon GO is probably the most well-known (and profitable) of these games, but there are many, many others. Some, including Pokémon GO, task you with engaging with icons and character animations across a map (it’s a great way to get your steps in!). Others bring these graphics into your living room, turning your home into a racetrack, a monster-filled dungeon, and more.

These products typically work via apps downloaded onto your phone that then use your geolocation to populate the area and connect you with other players. Or, they might scan your nearby space and use knowledge of the environment to match the digital world to your physical surroundings.

But gaming is only the beginning.

Other augmented reality applications take things in a different direction, not necessarily creating an overlay onto the physical world, but enabling your phone (or some other connected device) to manipulate the environment in either active or passive ways.

Right now, this is typically accomplished within a highly controlled environment purpose-built for a specific application. Theme parks are probably the most notable examples. When you enter Star Wars Galaxy’s Edge at the Disney Parks, for instance, you can complete missions that have an effect on the world around you, augmenting the reality in a way that’s unseen by everyone else. Or at Super Nintendo World in Universal Studios, you can collect coins and defeat bosses through the use of a wristband.

You can see how this version of augmented reality might grow into environments beyond a theme park. Think about a system where a pedestrian signal can detect a phone on a person waiting to cross a street and automatically change the light to accommodate that person. Or one that displays different ads on digital billboards depending on the preferences tracked and saved within your phone.

If augmented reality is an overlay of your standard vision of the world, all you need to create that is something that encompasses your sight. And that doesn’t always have to mean it goes over your eyes directly, like a wearable.

When you think of your car’s windows as a series of screens, you can see how augmented reality can be deployed to vehicles as well. Various auto manufacturers and tech developers are leading the charge in this way, working on cars with augmented reality that would display things like your speed, charge status, route, and more directly onto the windshield.

We’re in the infancy of AR for vehicle assistance and traffic flow. As self-driving cars become more prominent, the distraction of real-world information won’t necessarily be a dealbreaker for widespread technological adoption. Imagine notifications that alert you to construction and offer alternate routes. And in the same passive ways described above, where a pedestrian’s presence can activate traffic signals, so too could traffic lights and other road infrastructure detect your vehicle’s presence and alter traffic to create the best flow possible.

Savvy retailers are using augmented reality to improve the efficiency of their operations and even upsell customers.

At Sam’s Club and others, you can now scan your own groceries directly on your phone, bypassing the checkout line entirely. Amazon has opened up physical locations where you don’t even have to scan anything; instead, the onsite technology combines with tracking details on your phone to automatically charge you for products you walk out with.

Other retailers can use AR to give you information about products, suggest other products, send coupons, and do basically everything else imaginable to get you and other consumers to spend more money. Even restaurants are getting in on AR, in a sense, by offering digital versions of their menus by scanning a QR code (QR: the grandfather of AR technology!).

Augmented reality is deployed in more areas than you may realize, and it’s only bound to grow. Organizations who get creative with how to incorporate it into their business operations have opportunities to increase profits, draw new customers, and transform what’s possible.

Let’s work together to define that vision for you and create a new possible.